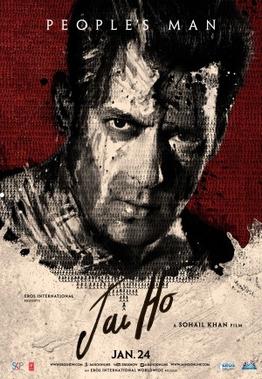 Salman Khan plays the role of Major Jai Agnihotri, fighting an individual war against dishonesty and justice, creating a nationwide movement by convincing people to do a good deed for three people who must in turn each do good deeds for three others.  Partly shot in Romania, the film also features a Gujarat Garbai song, Photocopy, with quirky lyrics.

In late 2012, Sohail Khan announced his intention to remake the Telugu film Stalin. Renaming it Mental, Sohail began to put the project into action. Shooting started on 27th February 2013 but was then postponed from February to late March 2013, and the project was then re-titled Jai Ho. While there were rumours that the film would release in a 3D format, Sohail Khan said, “First, let me complete my film in the normal format, then I’ll take a call”. The first poster was unveiled by Salman Khan on 6th December 2013. It consists of a digitally merged image of thousands of fans rendering a portrait of Khan and was created by his fans. The domestic and overseas theatrical rights of Jai Ho has been reportedly sold for 110 crore Rupees. The film has been made at a cost of over 40 crore Rupees.


If you have seen this film, why not write a review for bardaionline?

This Trivia feature is one of a series. Please CLICK HERE to see more features.