Leicester was recently proud to host an outstanding exhibition of aspects of life in India.

Samaj members Vigna and Kush Ravi Modha visited the event. The event involved various perfoming artists from India. You can see a review video and footage of some of the performances (from BBC Asian Network, may not be viewable outside the UK) 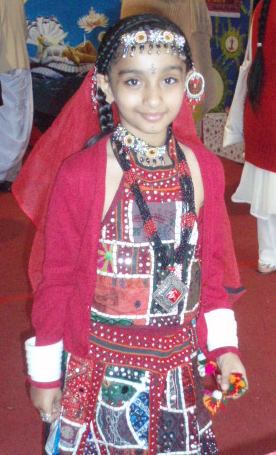 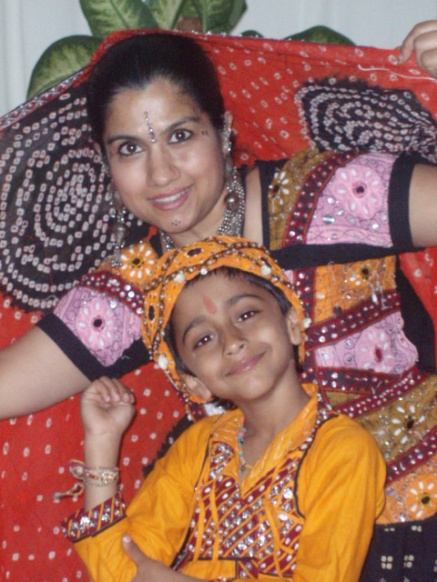 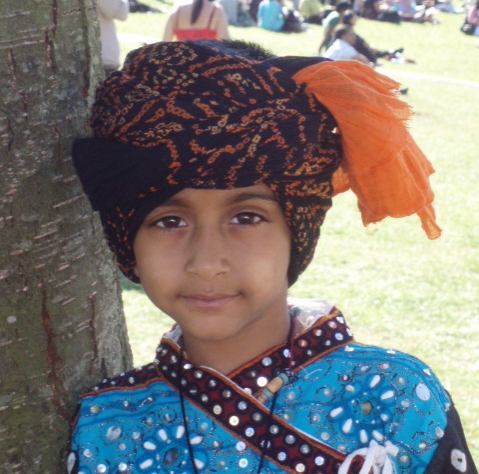 Traditional dress are hand woven and often made of patchwork design. This is then embroidered with colourful beads and mirrors. ‘Bandhini’ or ‘tie & dye’ is a method of making patterns on the fabric by tying little sections of fabric with a string and then dipping this into colourful liquid dye (pigment) and left to dry. When done a several times, it creates patterns – see the picture on the hat called ‘paghdi’ on Kush’s head above right. 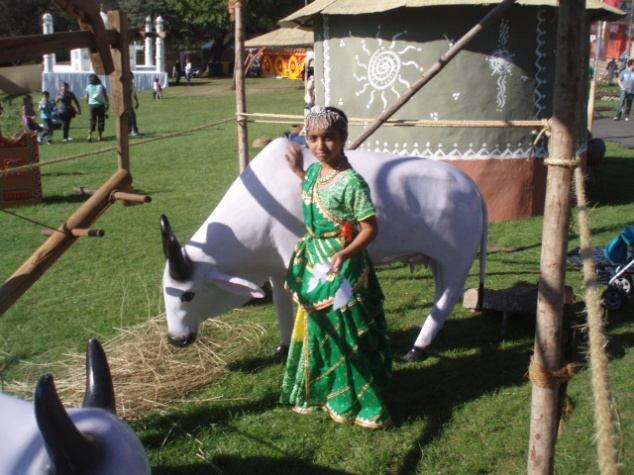 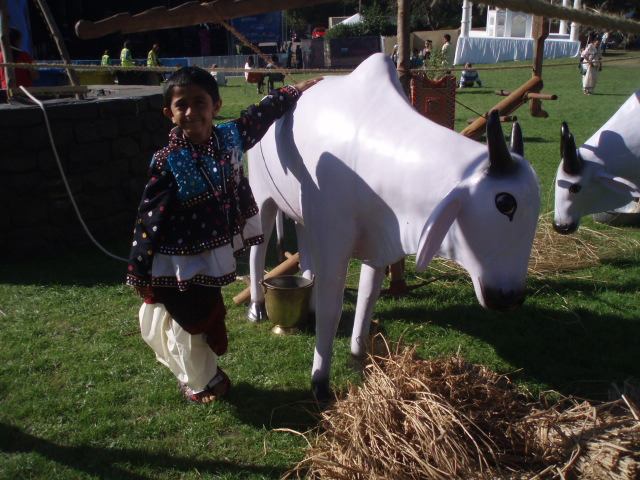 Tending to the farm animals is a family’s responsibility and everyone has to muck in. Some animals are used to pull farming equipment on the fields. A family having 2-3 cows/bulls is considered very wealthy. They sell the milk from the cows and so make sure that they can provide food for the cows even if they had to go hungry themselves. This is why the Hindus consider a Cow as a sacred animal.

We got talking to ‘Mahatma Gandhi’, a very important person in the Indian History. He showed us how to spin yarn on his hand made wooden spindle. The yarn is then collected and used to weave carpets, mats, tapestry, cloth by hand. All the work is done by hand – no machinery is used. 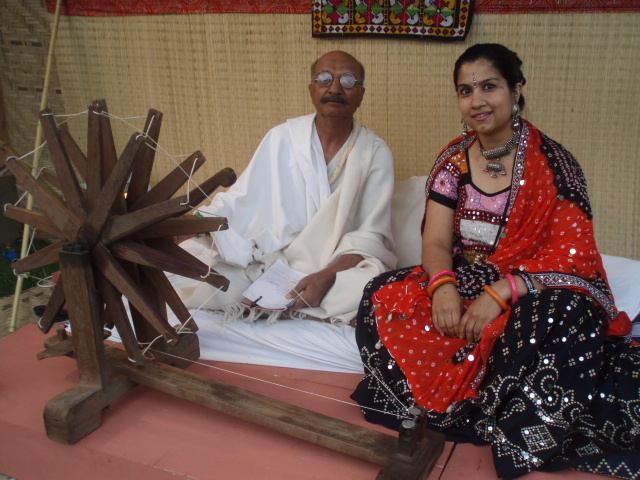 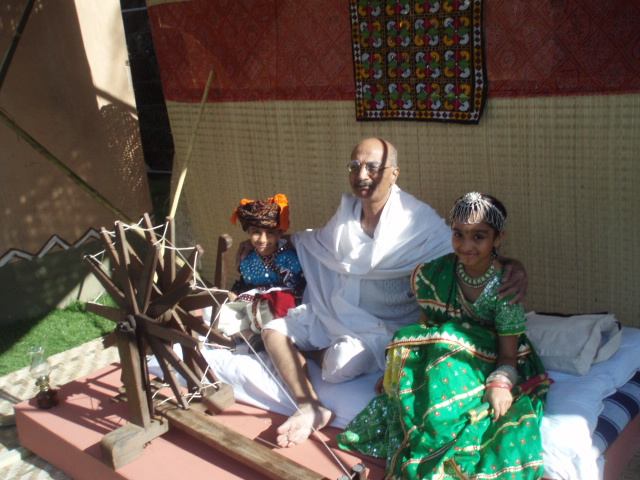 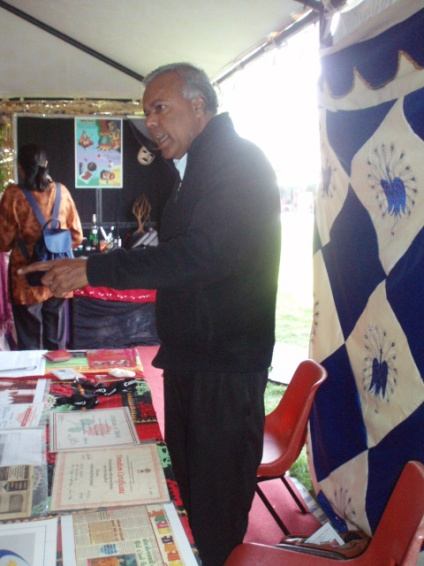 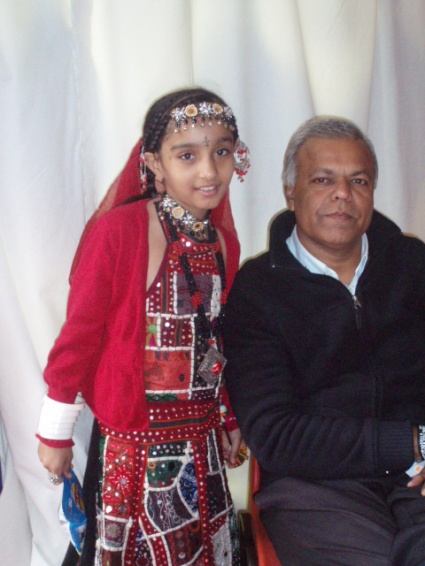 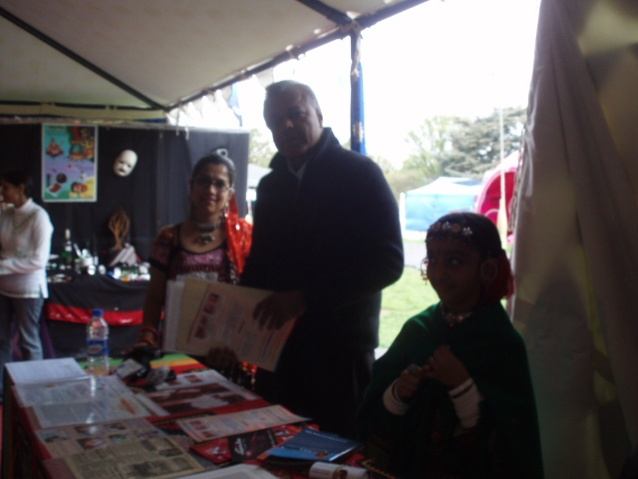 Mr Arvind Pandya, a holder of Guiness Book of Records for Long Distance BACKWARDS running – having run 7500 miles in his lifetime – talks to us about his charity work in India. He organises Eye Camps in remote villages where Doctors can come and provide eye- treatments, diagnosis, spectacles and carry out eye operations free of charge. About 3 people are becoming blind every minute in poor countries due to malnutrition, disease and lack of treatment. More and more young children are having cataract eye problems (in UK this is common in elderly age). Mr Arvind Pandya was a guest of ours at our family home. He also taught us how to do YOGA, Exercise and about the importance of eating well for a healthy lifestyle. We all helped to raise awareness of his charity work at the Exhibition.

There is usually only 1 room for the whole family to live in. All other work cooking, washing, cleaning, entertaining, even sleeping is done outside the home during daytime.

The inside and outside walls are decorated with chalk patterns. 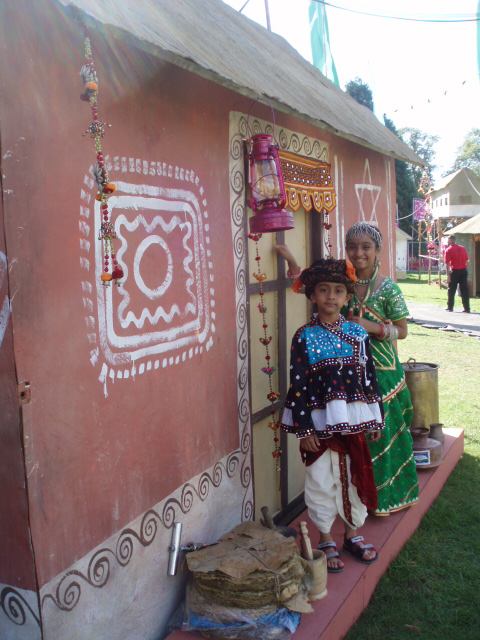 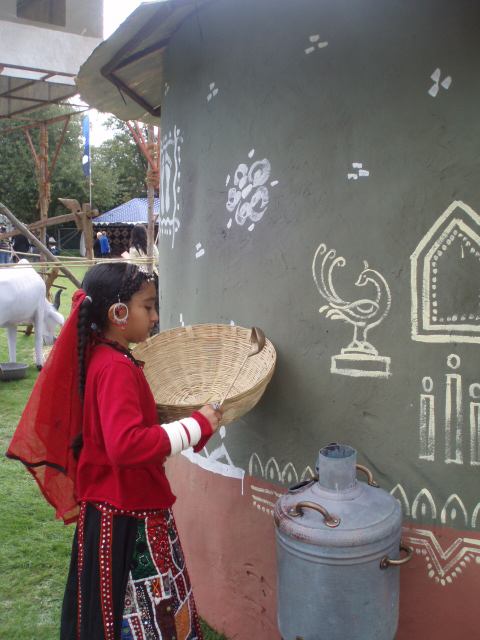 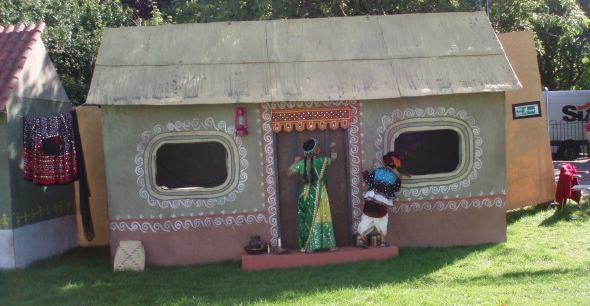 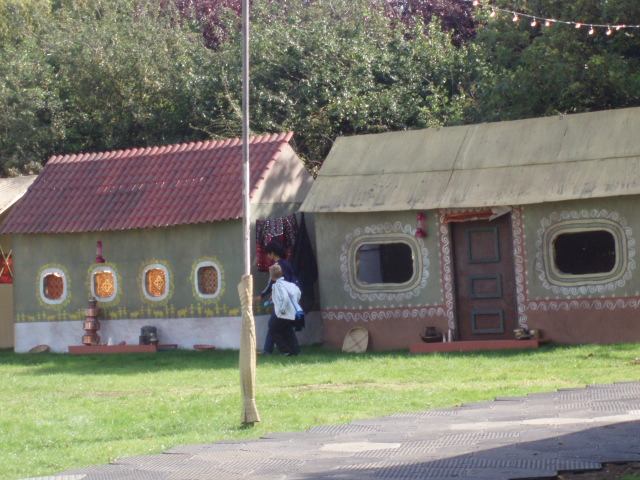 Some people are forced to move from their homes and villages in search of work. These people are known as tribal folk. They often end up heading towards the cities where there is no shortage of work. Some of these people become street entertainers, cleaners, recyclers. They rely on charity given by city workers and tourists. They make their own little home that is no bigger than a garden shed – in fact it looks like a shed and live in close community (they stay together). Sometimes 10 people sleep in this type of accommodation because there is not enough space to build a house for each of them. This area is known as a ‘Slum’ (hence the name associated with the film ‘Slumdog Millionaire’ which means a person who comes from the ‘Slum’ areas. The Government is working to provide Shelter to these people so they don’t have to live in these areas and in this way but there isn’t enough space. People are also discouraged from coming to the Cities by being offered work/trade in their own villages though Charities. We all support them through Oxfam, Red Cross and SightSaver etc. 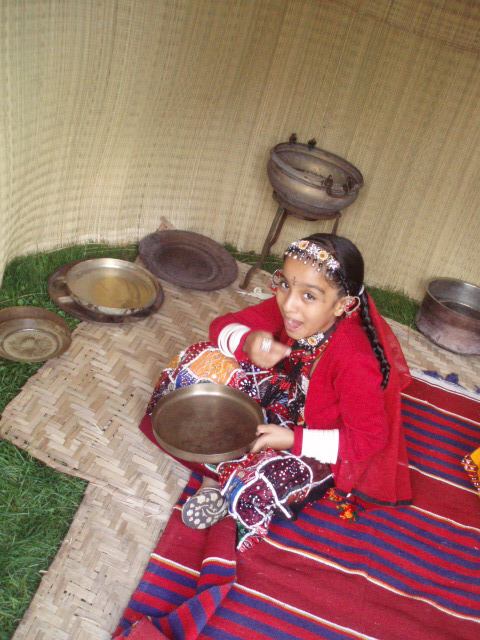 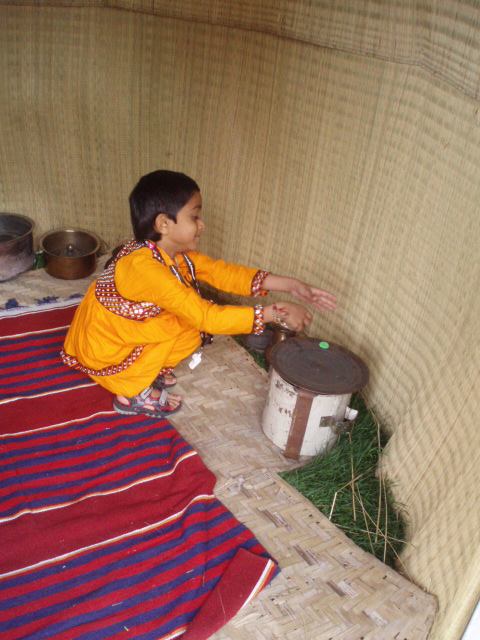 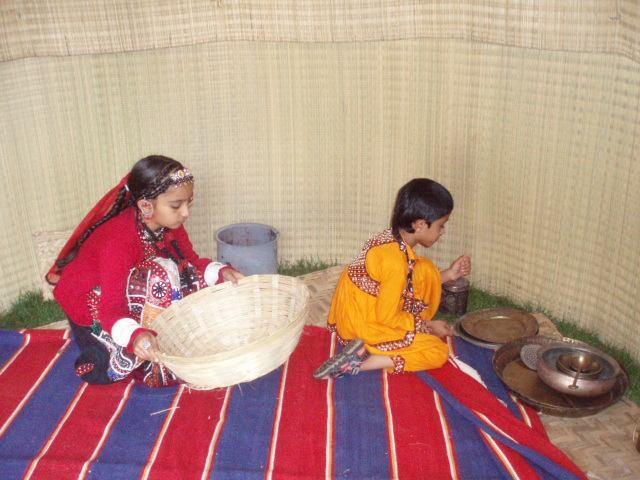 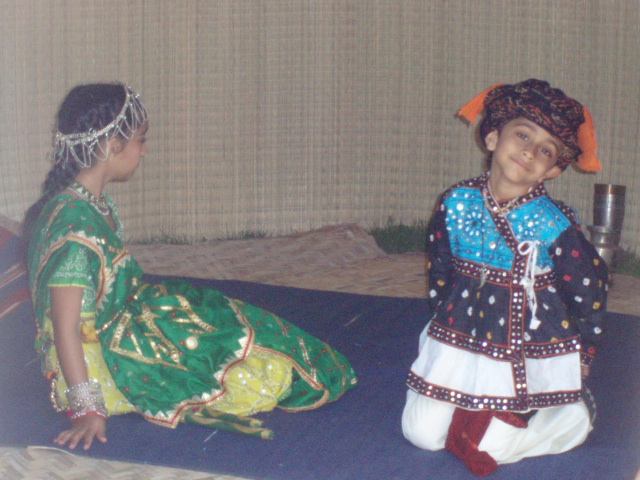 The bamboo hut picture above simply provides shelter from the weather. There is no furniture and people sleep on beds made from a simple frame with mesh all over it. This is also used to sit on during the day or people sleep on the floor. 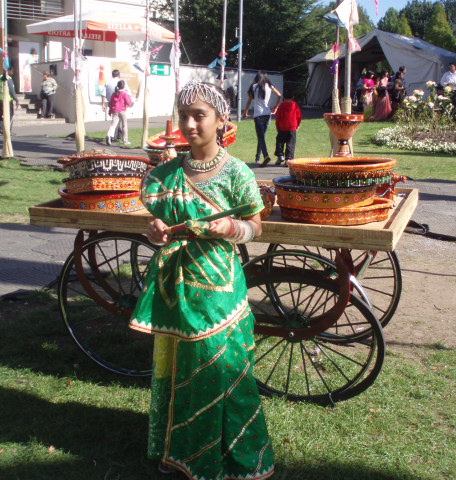 Selling decorative trays that can be used to carry vegetables home from the market, or hand-made jewellery etc. 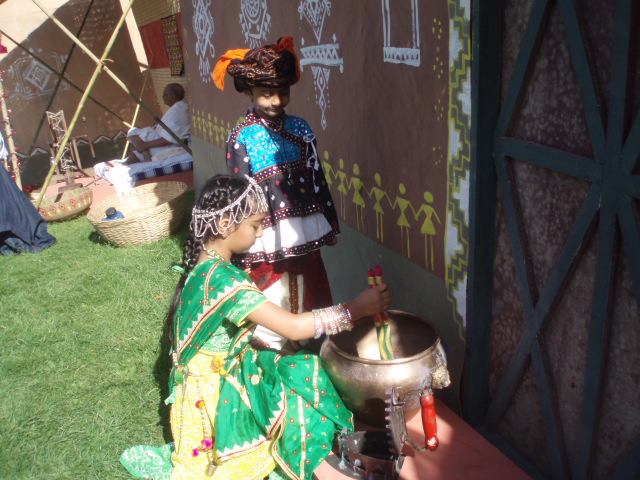 Sorting grains outside the home. Children may not have school so they get involved in the daily chores. 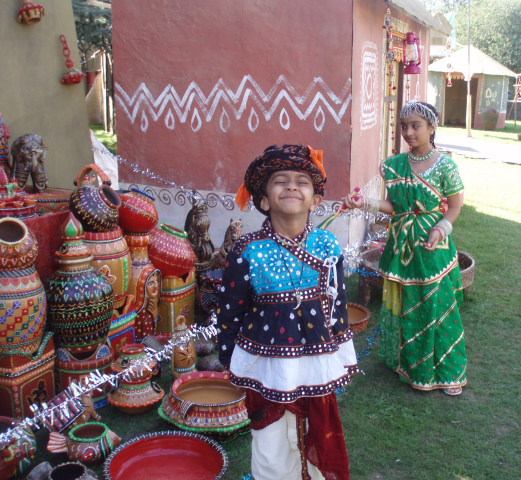 Selling hand painted pottery. The pottery is made by hand, painted and sold. This type of pottery is used to carry/store drinking water from the well. 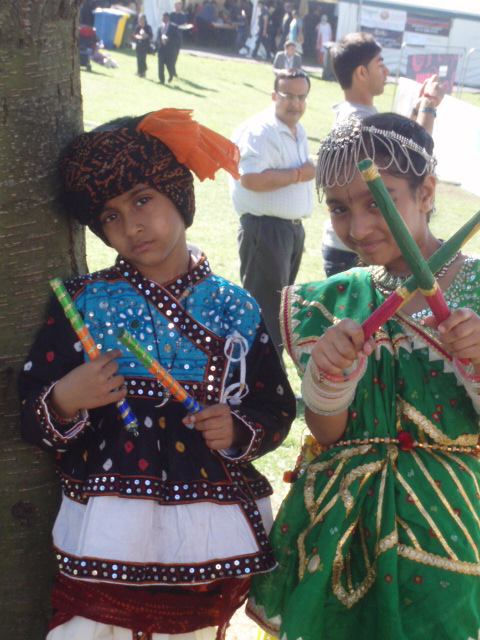 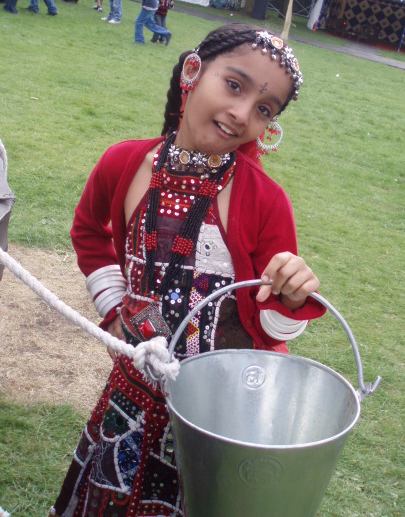 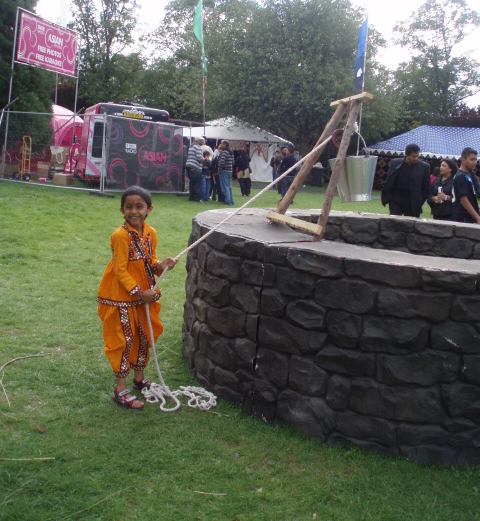 Getting water from the well and carrying this home. Girls as young as 7 years old do this daily 2-3 times a day. Older women carry 3 water filled containers placed on top of another ON THE HEAD! Imagine how strong you need to be to carry that weight and what excellent co-ordination you must have to balance this on the head whilst walking! 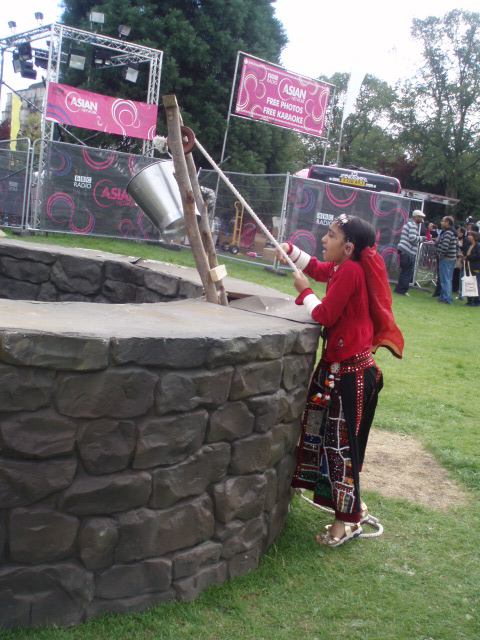 Drawing water from the well. 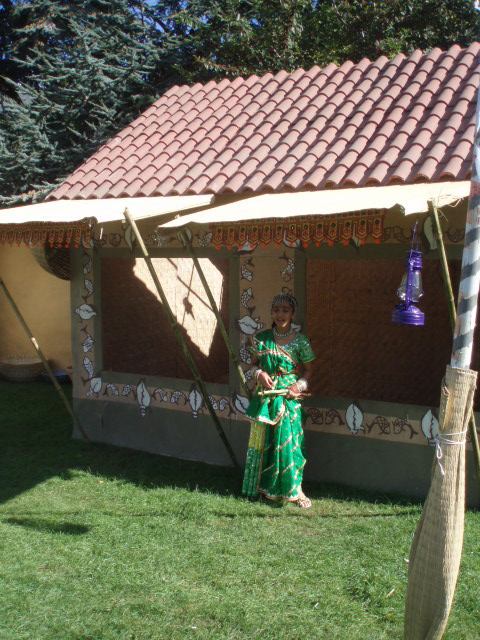 A food stall (above) 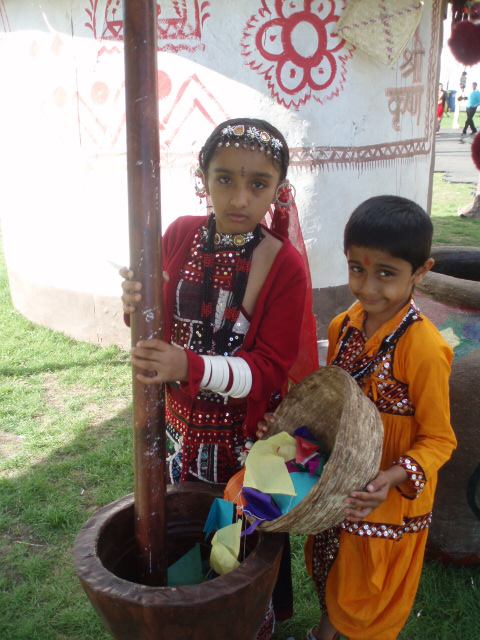 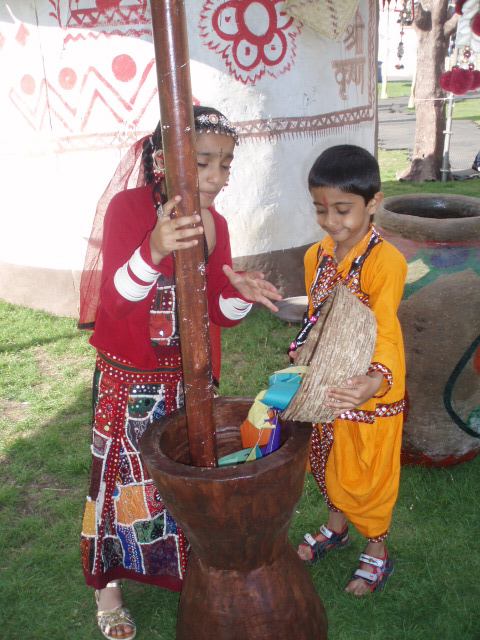 A wooden Mortar and Pestle – used to make/blend spices and as a mixer. What a change from a food processor! 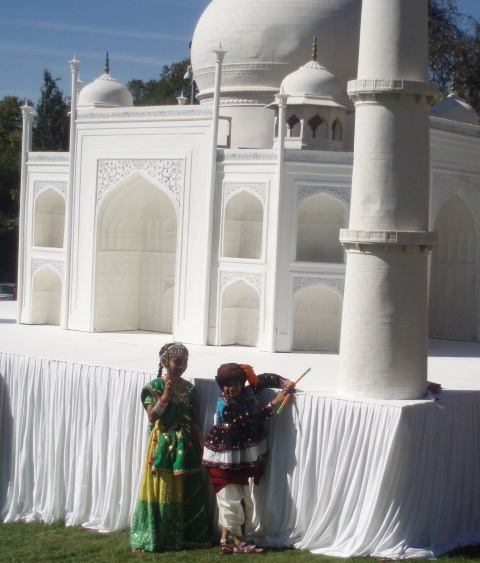 The Taj Mahal – one of the wonders of the world in Agra near Delhi. Designed & built by a king to show his undying love for his wife. It is made from marble – which maintains an even temperature all throughout the year – it never gets too hot or cold inside, it doesn’t require any special cleaning either (it never gets mouldy!).

We hope you liked sharing our experience. We had a fab’ day!