The Life Story of Trikamjibapu

Trikamjibapu is regarded as the Sant of Bardai Brahmins. This section contains a unique online collection of his life story, audio bhajans and video. The lyrics of Trikamjibapu bhajans will also appear here soon.

Sri Bardai Brahmin Samaj Leicester (UK) is grateful to be allowed to use story, audio, video and bhajan resources to uniquely capture our Bardai Brahmin roots and culture for present and future generations to enjoy. 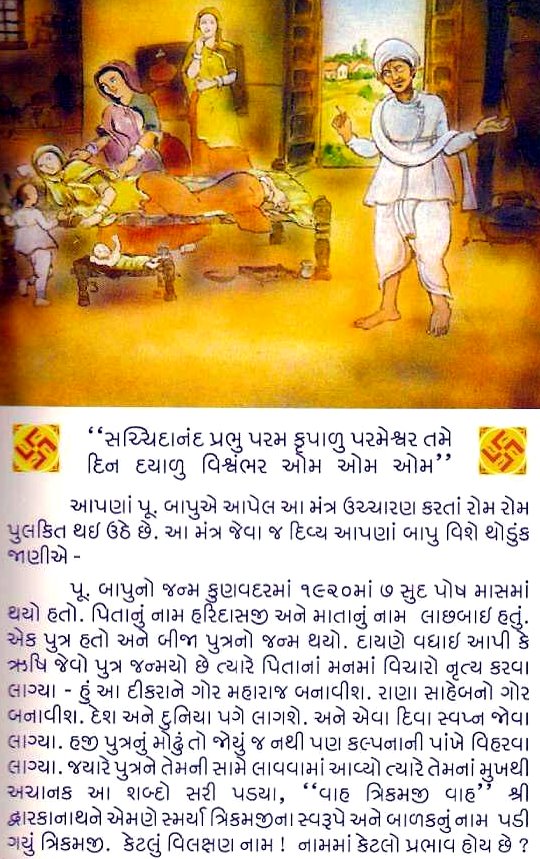 This mantra was given by our pujya Bapu. Let us now learn about our Bapu and begin his special life story.

Pujya Bapu was born in Kunvadar, near Porbandar, Gujarat in 1920 on Saatam Sudh in the month of Posh (January). His father’s name was Haridas and his mother’s name was Laachbai. He had one elder brother. On his birth, he was predicted to be a “son like a Rushi”, and his father even before seeing his son’s face, wanted him to be a very religious noble priest, and that of Rana Sahib, the King of Porbandar. He wanted the entire world to bow to his son and think well of him.

On starting school, all Trikamji would do was doodle circles on his slate and be in a world of his own; he had no interest in writing and studying. His father thus decided to make him work.

One day, Trikamji was sent to look after his father’s cattle herd. He just kept staring at the blue sky.

Someone passing by, noticed Trikamji daydreaming and said to him, “Your cattle are wondering everywhere in to the fields. What are you doing son?”

Trikamji uncaringly replied, “Do not worry, they will come back”.

The man thought he was rudely replied to, and he told Haridas that his son had insulted him when questioned.

Haridas got angry and wanted to punish his son by beating him with a stick. But on seeing the light on Trikamji’s angelic face, he felt sorry and forgiving.

Trikamji’s attitude did not change even when he was grown up; he was living with no worries and care in the world. Haridas one day got tired of him and told him to run away if he could not improve his attitude to life. Trikamji took his father’s words seriously, and ran away. Haridas felt sorry for telling his son to run away and started to worry where his youngest son had disappeared.

Haridas sent people to search everywhere for Trikamji. They went from Porbandar to Khepia and he was not to be seen anywhere. His father got really worried for Trikamji’s safety. Trikamji’s mother, Laachbai, wished that Trikamji had been married off. At least he would not have run away from his wife!

Two to three months passed away, and a letter appeared at Haridas’s home. The letter was from someone who assured Trikamji’s parents that their son was safe and well with a group on a pilgrimage (Yatra). They were bathing in the river Jamuna and offering prayers with their son in the group. 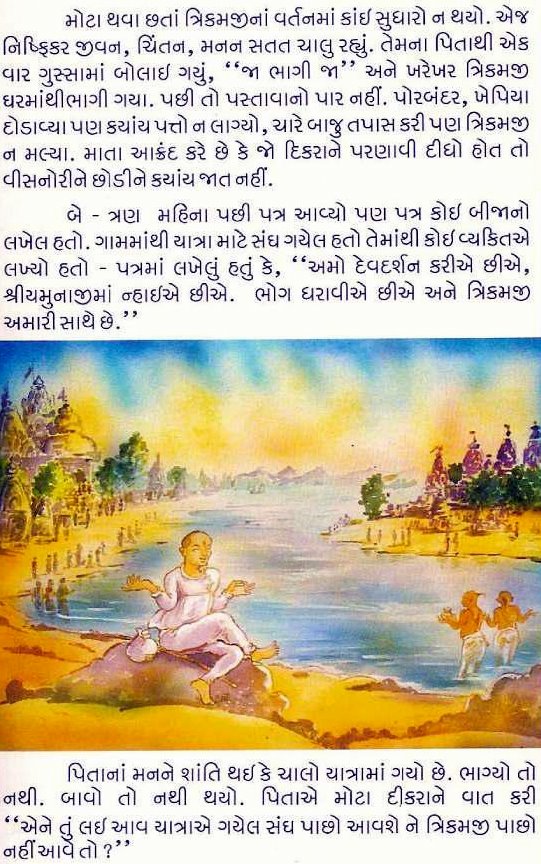 His father breathed a sigh of relief, and was pleased that his son was on a Yatra and had not turned into a nomad.

Haridas sent his elder son to look for his younger brother and bring him back home before he wondered off again from the Yatra.

Trikamji was also feeling home sick and wished someone would come for him to take him back home. He was getting no peace (shanti) on the Yatra.

His elder brother was explained to calmly bring Trikamji back. “Do not go angry on your younger brother”, Haridas told him.

On seeing his elder brother, Trikamji was overjoyed and he left everything to follow his brother home. His brother had no problem bringing Trikamji back home. 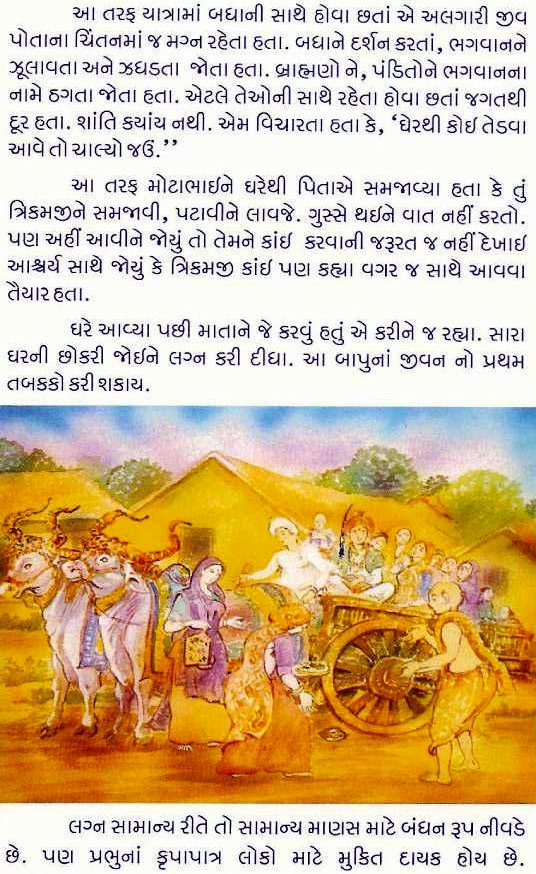 On returning home, Laachbai wished her son Trikamji to marry. He reluctantly married a girl from a good background, which his parents chose. He wanted to be religious and not be imprisoned in marriage. He wanted to be closer to God, and marriage was not for him, he thought.

……STORY TO BE CONTINUED